It’s an enjoyable experience when you meet someone and discover that that person is a raw feeder, too. We raw feeders love telling the story of how we first discovered the species-appropriate raw diet.

Back in my kibble feeding days, more than six years ago, I started feeling disturbed by the amount of poop my dogs were producing. I can remember the day I realized that it just couldn’t be natural or healthy. I was walking around that day filling an empty kibble bag from a couple of days of poop from our three Aussies. The empty kibble bag was one of those large 30 kg bags and it was filling up very quickly. That was monumental for me like a light bulb had gone off at that moment – something’s not right here. I remember feeling upset that the dogs seemed to be pooping more than I was feeding them. What exactly are their poor bodies taking from this food?

I’m not one to think about a problem and then just brush it off. I immediately started searching online for information on why my dogs were pooping so much and if there was any way to change it. Going in, I had no idea that the raw diet was a thing. The first info that caught my interest was the ingredients of kibble. I learned that the dog’s body did not need fillers like corn, and my research suggested I try feeding them a grain-free kibble. Looking back, it was such a waste of money. Not only was I still feeding them kibble, but also it was three times the cost with three times the sugar. But I wanted to do the right thing by my dogs, so I bought a bag of a very well known Canadian grain-free kibble, spending roughly $100 on the bag. I was told it was one of the better ones on the market; you’d know the brand, it’s quite popular. The results, pardon the pun, were crappy – there was absolutely no change in my dogs’ poop quantity, and it was less firm.

Back to the computer I went. I’m not sure how I got to the Yahoo Raw Feeding Group; maybe someone I spoke to online directed me to it, maybe I read someone’s comment, I can’t recall. Regardless, finding that group was the best thing I ever did. I learned straight from 30-year raw feeders about the whole prey model. I caught on very quickly and started my dogs the very next day on raw diet of chicken breasts, thighs, and quarters, all still with the bones in. I won’t lie, I was very nervous with the first piece I gave my dogs, but because I had read probably every single post on that group and asked every single question imaginable, I felt pretty confident that all was going to be fine. It was still scary because I had to rethink what I had previously thought about chicken bones and understand that they wouldn’t kill a dog. It was actually delightful to watch them crunch, crunch, swallow those chicken pieces without any issues whatsoever and with such enjoyment and pleasure in their eyes. 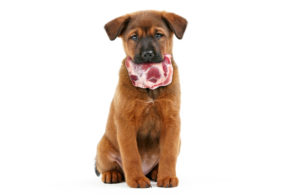 Over the next few months, I had my dogs on all proteins and organs, and they were doing amazing. My dogs were now pooping a whole different poop. It smelled so much better, literally nothing like dog poop at all, and I figure about 80% less poop was being produced by their bodies. Less waste meant their bodies were actually utilizing the food properly.

It turns out there were other benefits to the raw diet that I didn’t even know about. Their coats started to shine, their teeth turned from yellow-brown to gleaming white, their breath smelled great, the dandruff was gone, the tear stains disappeared, and their muscle mass increased drastically. They had much more energy, too. It’s almost funny how it all worked out so great.

After a few months of prey feeding, I switched to a Ground Complete Meat Mix, and for financial and convenience reasons I made the switch. It is so much easier than the whole prey model, but with all the same wonderful health benefits that keep my Aussies feeling fabulous.

2 thoughts on “Raw Diet – Why Feed a Species Appropriate Meal?”